The Agricultural Research Service (ARS) has an extraordinarily strong research program in corn, with leading scientists at multiple locations cooperating to make crucial advances in one of the country’s and the world’s major crops. Those advances are not only benefitting corn, but are also serving as the basis for new discoveries in all plant sciences.

Most of the ARS corn research program centers on the critical need to broaden genetic diversity in corn. Corn is a highly bred plant, which has resulted in a very narrow genetic base. Researchers are looking outside the limited gene pool now in common use to find sources for essential new traits that growers need for the future.

The ARS corn research program concentrates on new insect and disease resistance, resilience to climate change, nutritional improvement for health benefits, quality improvements for both food and biobased products, and enhanced food safety with aflatoxin resistance—objectives that all reflect the priorities of U.S. Department of Agriculture Secretary Tom Vilsack.

As part of the effort to broaden corn’s genetic base, ARS researchers are leading the Germplasm Enhancement of Maize (GEM) project, a long-term, wide-scale collaboration of international, federal, state, and private partners to bring tropical and other exotic maize genes into the breeding pool. ARS scientists in GEM are coordinating testing and evaluation of thousands of new, more diverse corn lines under a range of environmental conditions.

ARS has also been a partner in the sequencing of the corn genome, which is revealing its functional regions. From the sequencing data, ARS researchers have assembled a haplotype genetic map (mapping of alleles located closely together on the same chromosome that tend to be inherited together) that lays out portions of the genome shared by 27 diverse inbred lines of corn.

To better understand natural diversity in corn, ARS scientists and collaborators have developed a massive genetic resource, which required assessing more than 1 million corn plants. These projects have received major support from the National Science Foundation, along with the USDA National Institute of Food and Agriculture and the U.S. Department of Energy.

Corn researchers in ARS are also developing new scientific tools and techniques to speed up the efficiency of crop breeding and developing more effective and environmentally sensitive production methods.

ARS scientists are also using corn as a model for grasses that can be used to produce biofuels. By extrapolating from the wealth of genomic and genetic information available for corn, scientists are making swifter progress in developing new bioenergy feedstocks from sorghum and perennial grasses. 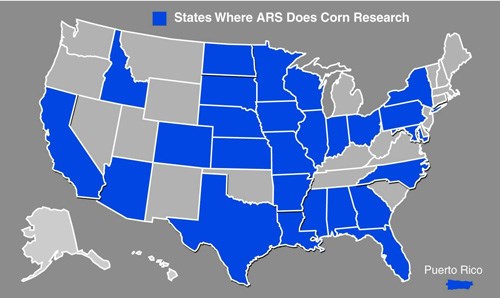 "ARS National Research Program on Corn" was published in the September 2010 issue of Agricultural Research magazine.