Agricultural Research Service scientist Les Torrans has spent the bulk of his career in the Mississippi Delta looking for ways to help commercial farmers grow a better catfish or develop more efficient ways of feeding and harvesting them.

Now, with the U.S. farm-raised-catfish industry struggling in the face of cheaper foreign imports and rising production and feed costs, the scientist—based at the Catfish Genetics Research Unit of the Thad Cochran National Warmwater Aquaculture Center at Mississippi State University (MSU), in Stoneville—is focusing on new field research he thinks could provide some help.

In just the last year or two, Torrans says, the number of catfish hatcheries in his portion of the Delta has declined from 30 to just a dozen or so.

While growers have known for as long as there have been commercial catfish farms that aeration of ponds was critical for fish survival, Torrans provided empirical evidence on exactly how oxygen levels affect feeding and production in ponds. His research has produced new oxygen-management recommendations for ponds that can save energy and improve production.

More recently, Torrans and MSU’s James Steeby developed specific dissolved oxygen recommendations for catfish hatcheries. Data they collected on catfish egg and fry metabolism showed that most hatch variations are caused by insufficient dissolved oxygen in the water. Poor water circulation around and through egg masses, especially at high egg-loading rates, compounds the problem, according to Steeby and Torrans.

Now Torrans is applying his mechanical skills to building a high-intensity catfish egg incubator he calls a “see-saw.” Torrans says the device will provide a better mix of dissolved oxygen for vulnerable catfish eggs by dipping the egg masses, much like a tea bag being dipped in water, then lifting them completely out of water before dipping them again. As long as the egg masses stay wet, they are able to exchange gas across the chorion (egg shell). Oxygen in air is much more abundant than oxygen in the water, so this innovative see-saw device takes advantage of the water dipping to maintain the developing eggs’ moisture while using the air for oxygen delivery.

“It looks like we can hatch more than twice as many eggs with the see-saw in the same space and use half as much water as with the traditional paddle-wheel method,” says Torrans.

“What we’re seeing is an industry in trouble in Mississippi, Alabama, Arkansas, and Texas, where more than 90 percent of the nation’s catfish are grown,” he says. “If we can get more dissolved oxygen to the eggs, more will hatch. That would obviously be a boost to farmers. We have to make our domestic production as efficient as possible.”—By Chris Guy, Agricultural Research Service Information Staff. 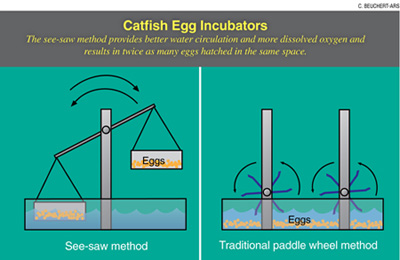 This research is part of Aquaculture, an ARS national program (#106) described at www.nps.ars.usda.gov.

"A Better Way To Hatch Catfish Eggs" was published in the October 2010 issue of Agricultural Research magazine.