If it were a museum, chances are it would be better known. But the U.S. National Plant Germplasm System (NPGS) is a vital network of genebanks where plants from around the world are curated, propagated, analyzed, and distributed for scientific use.

Most of the 511,000 samples, or accessions, of seeds, tissues, and whole plants are not on public display. They are kept at more than 20 Agricultural Research Service genebanks, many of which receive additional support from universities and state agricultural experiment stations.

The materials are available to researchers and educators globally, and as one of the most extensive collections of crop diversity in the world, NPGS plays an integral role in maintaining the U.S. and world supply of food, fiber, and other economic crops.

In addition to its vital role in today’s agricultural research, NPGS serves as a kind of insurance policy for providing the resources to meet challenges to U.S. and global agriculture presented by evolving pests, pathogens, and environmental changes. It also provides producers with the crop diversity necessary to keep up with changing markets.

Maintaining diverse collections of living plant materials from around the world is a daunting task. Different crops and the wild species related to them have different storage and propagation requirements. Seeds of many species can be stored by drying and freezing, whereas seeds of other species cannot survive such treatments. Many fruit crops and other species must be maintained as whole plants in the field or in protected greenhouses or screenhouses to maintain their health, disease-free status, and unique genetic nature.

“We want to make sure we have a broad base for every important crop in the collection, from both a taxonomic and a geographic standpoint, so when the need arises, we have the necessary genetic tools available,” says Gary Kinard, research leader of the National Germplasm Resources Laboratory in Beltsville, Maryland, which coordinates efforts to acquire, document, and distribute NPGS materials.

ARS shares the materials free of charge with researchers and educators around the world. NPGS mailed 183,000 samples to users in the United States and more than 75 other countries in 2008. ARS researchers are using the collection for a wide range of purposes, such as addressing water shortages in California’s Central Valley, combating a nematode that costs U.S. cotton growers an estimated $100 million each year, and finding resistance to diseases and pests that threaten the existence of important crops.

The uses of the collection are practically infinite, so only a few examples are given here.

In California, almond production is affected by water availability. In addition, newly planted almond orchards often experience replant disease, a syndrome caused by an antagonistic microbial community in the soil. Malli Aradhya, a geneticist at the National Clonal Germplasm Repository for Tree Fruit and Nut Crops and Grapes in Davis, California, is searching the ARS collection of almond species from Asia to identify new germplasm accessions with the genetic traits that help combat replant disease and improve drought tolerance.

Nematodes are microscopic worms that can sometimes destroy up to 50 percent of the cotton crop in fields from Texas to Florida. Plant pathologist Alois Bell and colleagues used an African species of cotton that resists the reniform nematode, a common pest, to help cotton growers address part of the nematode threat. By crossing and backcrossing resistance from the wild African species into specially developed hybrids, they developed lines that produce quality fiber and resist the reniform nematode. Bell and colleagues, who recently released the seed of two lines to breeders, originally obtained the African species from the National Cotton Germplasm Collection, which is part of the ARS Crop Germplasm Research Unit at College Station, Texas.

Maintaining the cotton collection isn’t easy. Cotton seeds must be regrown every 10 years, and there are 9,300 different accessions of cotton. Curator James Frelichowski must keep seeds at 4˚C (39˚F) and at 20–23 percent humidity. Under those conditions, seeds remain viable for at least 10 years. New plants are propagated at nurseries in College Station and in Tecoman, Mexico. (See "Freeze-Drying Is Key to Saving Fungal Collection" in this issue.) The Mexican nursery provides an extended growing season and a good site for cultivation of a wide assortment of cotton.

ARS has a long-running program, active since 1898, to acquire new samples for its collections. Each year, researchers conduct about 15 expeditions, coordinated by the Beltsville germplasm laboratory, to search for a range of crops and crop relatives with unique traits, such as drought tolerance and pest and pathogen resistance. Foreign explorations are conducted with collaboration from institutions in host countries. Aradhya, for instance, collected more than 145 new accessions of fruit and nut germplasm in trips to Azerbaijan in 2007 and 2008.Such trips can have long-range benefits. A peanut found in a Brazilian market in 1952 is a source for resistance to a wilt virus of U.S. peanuts. A wheat plant collected in Turkey in 1948 effectively resisted a fungal pathogen that emerged as a major threat 15 years later. Its genetics are now incorporated into virtually every wheat variety grown in the Pacific Northwest.

Most requests for materials are filed through the Germplasm Resources Information Network (GRIN), an online database (www.ars-grin.gov) that identifies and keeps track of every sample in the collection. Paul Red Elk, a Lakota Sioux youth counselor and educator, has been accessing the database for 6 years to acquire seeds of corn, beans, and onions to teach Native American children, ages 6 to 16, about their ancestral ways in Farmington, Minnesota. His program is designed to instill pride in at-risk children, in part by getting them involved in community gardening. He likes using the GRIN database because it provides accurate descriptions of the origins of the seeds and other materials in the collections.

The youth grow corn, beans, and squash in circular patterns and raise native grasses, wild onions, and wild garlic for soups and stews, as Native Americans once did.

“We try to teach them that this is the way people used to eat,” he says.—By Dennis O'Brien, Agricultural Research Service Information Staff. 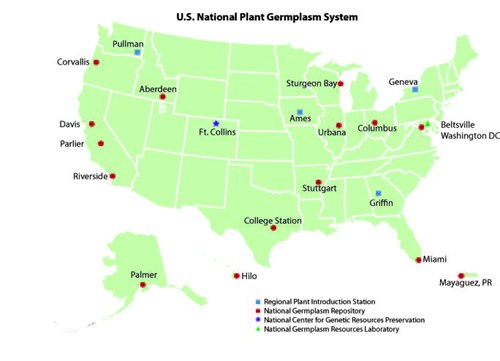