The Agricultural Research Service’s research on oats and barley addresses every facet of safeguarding and improving these important cereal crops, from enhancing our understanding of their fundamental biological processes to breeding varieties for specialized needs to improving production methods.

One essential priority of the ARS research program is to find solutions to the critical challenges that new disease and pest problems are posing to oat and barley production in the United States and around the world. ARS scientists are deeply involved in the search for answers to new strains of cereal rust, such as Ug99, stripe rust, and Fusarium head blight, along with other emerging viruses and other pests. Finding such answers is key to helping maintain international food security.

ARS also fills a vital role as a leader in collaborations like the ARS-managed U.S. Wheat and Barley Scab Initiative. This initiative pulls together more than 70 federal and university scientists along with farmers and processors. Such partnerships provide opportunities for a nationally coordinated effort to protect wheat and barley from scab losses and help make the most of everyone’s limited resources. Similarly, ARS oat researchers are all contributing to a new oat molecular-marker project funded by the USDA National Institute of Food and Agriculture.

Among ARS’s unique resources for advancing oat and barley research is the agency’s crop genome database, GrainGenes. This database serves as a primary resource for oat and barley researchers and breeders everywhere. Not only is ARS developing and managing the database as a repository of genetic and genomic knowledge, the agency is also identifying many new genetic markers and applying them to improving basic biological processes in oats and barley along with enhancing traits such as disease and pest resistance. For example, ARS researchers are using genomic approaches to improve physiological, biochemical, and genetic regulation of carbohydrate metabolism in cereal tissues as well as finding sources of genetic and biochemical resistance to pathogens such as yellow dwarf virus.

Other ARS research is seeking to improve oats and barley—at the genetic and the processing level—especially to increase the crops’ nutritional quality. Among these projects are studies seeking to enlist these cereal grains in the fight to prevent obesity and diseases such as diabetes, particularly in children.

The plan is to tackle the issues facing oats and barley production at every level—from the molecular to postharvest processing—and then use the pool of knowledge generated to find solutions to the problems. 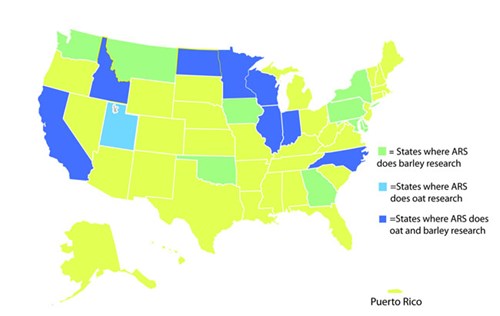 "ARS Research Program in Oats and Barley" was published in the February 2010 issue of Agricultural Research magazine.